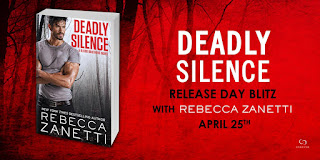 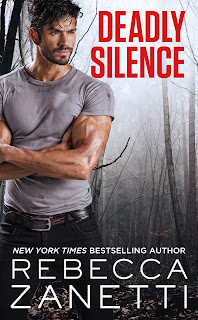 Under siege. That's how Ryker Jones feels. The Lost Bastards Investigative Agency he opened up with his blood brothers has lost a client in a brutal way. The past he can't outrun is resurfacing, threatening to drag him down in the undertow. And the beautiful woman he's been trying to keep at arm's length is in danger...and he'll destroy anything and anyone to keep her safe.

Paralegal Zara Remington is in over her head. She's making risky moves at work by day and indulging in an affair with a darkly dangerous PI by night. There's a lot Ryker isn't telling her and the more she uncovers, the less she wants to know. But when all hell breaks loose, Ryker may be the only one to save her. If his past doesn't catch up to them first...

If you are a fan of Rebecca Zanetti’s previous books then I really think that you will love Deadly Silence. Also if you didn’t know before starting it that it is a spin-off of another one of her series, Sin Brothers, so I think you will be extra happy because I know this book whore loves those books. Deadly Silence is filled with suspense, angst, secrets, plot twists and turns, characters that you not only become invested in but old ones you have loved in the past, and this is one you will not want to put down once you start it. I am purposely not going into a lot of detail because I don’t want to spoil this one in any way. I will say this though. Ryker is mine, I have licked him so I have claimed him. Yes I did just use toddler logic there as my son is “helping” me write this review lol. This is a definite must read! 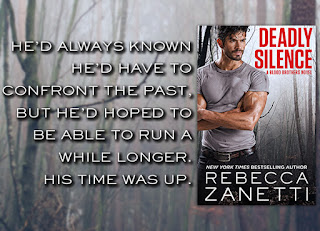