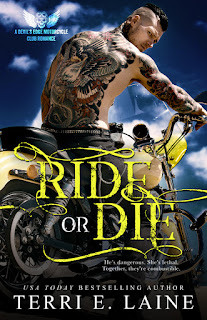 Piper’s no stranger to motorcycle clubs. She ran from that life several years ago and has no desire to go back. Only the life came looking for her in the form of a gorgeous, massive man they call Ender.

Ender is the cleanup guy. The guy who fixes sh#t when it’s broken. When he’s sent to retrieve the sexy hothead, he gets more than he’s bargained for.

She’s no wallflower and during her years away, she’s learned new skills making her lethal. But Ender is just as good at his job and he’ll get her back home, hog-tied if he has to.

There’s only one problem. The more time he spends with her road tripping across the country, the more he wants her in his bed. The patch that marks her as taken, however, belongs to another, his best friend and brother. And a man’s got to live by a code, one he can’t break.

She hates him for what he represents and his cold demeanor. But that doesn’t mean she doesn’t want one night to see if the man behind the mask lives up to his reputation. For her survival, she’s determined to break him and his code. It might be her only means of escape. And if she’s honest, the sooner she can get away the better because her heart is getting lost in him too.

I've become a recent reader of some MC books so when the opportunity came up to review this book I gladly signed up. I've read other books by this author and enjoyed them. I thought this book was ok, but not the strongest MC book I've read. I'm going to keep this spoiler free, which is difficult for me.

Our heroine was pretty badass-at least that's the impression we’re given. Piper is a hardened woman, who doesn't take crap from anyone but it isn't until near the end of the book that we learn why she's the way she is. I mostly liked her but it took me a while to connect with her.

Ender. Wow. Alpha male on a bike. From the second he was introduced on the page he intrigued me. I wanted to see how he was going to reconcile what was going on with him and Piper while still respecting his code.

The journey that these two took-the literal journey that is-all seemed to have some little things that didn't quite connect for me. I had a couple moments of wondering why something happened but generally the plot was ok.

I bought the attraction between them, even when they both tried to deny it. This book had some of the things I expect from a MC book-dirty talking, a sense of code and a hot male. Some of the plot had me saying hmmm but I still liked the book overall.

Terri E. Laine, USA Today bestselling author, left a lucrative career as a CPA to pursue her love for writing. Outside of her roles as a wife and mother of three, she’s always been a dreamer and as such became an avid reader at a young age. Many years later, she got a crazy idea to write a novel and set out to try to publish it. With over a dozen titles published under various pen names, the rest is history. Her journey has been a blessing, and a dream realized. She looks forward to many more memories to come.

Newsletter: http://eepurl.com/bDJ9kb
Posted by MelB at 8:00 AM