Forged in Desire, an all-new sexy standalone from Brenda Jackson is live!!! 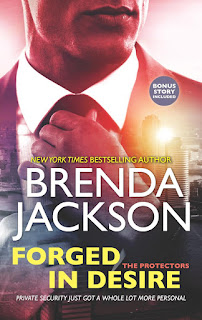 When good girl Margo Connelly becomes Lamar "Striker" Jennings's latest assignment, she knows she's in trouble. And not just because he's been hired to protect her from an underworld criminal. The reformed bad boy's appeal is breaching all her defenses, and as the threats against her increase, Margo isn't sure which is more dangerous: the gangster targeting her, or the far too alluring protector tempting her to let loose.


Though Striker's now living on the right side of the law, he's convinced his troubled past keeps Margo out of his league. But physical chemistry explodes into full-blown passion when they go on the run together. Surrendering to desire could be a deadly distraction—or finally prove that he's the only man qualified to keep her safe, and win her love.

Margo and Striker were an interesting couple. I was interested in their story and I liked it for the most part, but with some reservations.

There was an appeal in the idea that she was strong and independent, but needed to rely on Striker to keep her safe, although I found myself slightly annoyed with her at the beginning with the way she treated him. This resolves quickly, for the most part and I am not even totally able to say that her reaction is not normal for someone in her position...but it still annoyed me about her.

I think, for me, there was too much going on within the story...there was a romance, and the bodyguard idea, and family drama, and ex drama...there was just too much and I felt like I was bouncing from plot point to plot point in a few places.

Again, not badly enough that I did not enjoy it...but enough that it did alter my ability to really engage with the narrative.

This is the first in a series from Brenda Jackson and the blurb really caught my eye. I started out hooked with this book; the premise was really strong in the beginning but my interest didn't hold as strong as I expected it to hold.

I liked our main couple, I really did. Former bad boy turned good guy (who of course is smoking hot) and the good girl is a classic combination for a reason. Her profession was a fun one and one that provided a unique set of circumstances to the story. I thought the characters were well done and believable and I genuinely wanted things to work out for them.

My problem was with the secondary characters. There were just so many of them and so many issues among them that it kind of detracted from the main plot of the book in my opinion. It didn't affect the pacing for me exactly, I just felt they kind of got in the way at times.

Overall the book was fine. I'll definitely try the second book in the series now to see how it plays out.

Margo Connelly stared up at her uncle. “A body­guard? Do you really think that’s necessary, Uncle Frazier? I understand extra policemen are patrolling the streets.”

“That’s not good enough. Why should I trust a bunch of police officers?”

“Why shouldn’t you?” she countered, not for the first time wondering what her uncle had against cops. On more than one occasion he’d made that quite ob­vious.

“I have my reasons, but this isn’t about me—this is about you and your safety. I refuse to have you placed in any danger. What’s the big deal? You’ve had a body­guard before.”

Yes, she’d had one before. Right after her parents’ deaths, when her uncle had become her guardian. He had shipped her off to London for three years. She’d reckoned he’d been trying to figure out what he, a de­vout bachelor, was to do with a ten-year-old. When she returned to the United States, Apollo remained her bodyguard. When she turned fourteen, she fought hard for a little personal freedom. But she’d always known the chauffeurs Uncle Frazier hired could do more than drive her to and from school. More than once she’d seen the guns they carried. “Yes, but that was then and this is now, Uncle Frazier. I can look after myself.”

“Haven’t you been keeping up with the news?” he snapped. “Three people are dead. All three were in that courtroom with you. Erickson is making sure his threat is carried out.”

“And more than likely whoever is committing these murders will be caught before there can be another shooting. I understand the three were killed while they were away from home. I have enough paperwork to catch up on here for a while. I didn’t even leave my house today.”

“You don’t think a paid assassin will find you here? Alone? You either get on board with having a body­guard or you move back home. It’s well secured there.”

Margo drew in a deep breath. Back home was the Connelly estate. Yes, it was secure, with its state-of-the-art surveillance system. While growing up, she’d thought of the ten-acre property, surrounded by a tall wrought-iron fence and cameras watching her every move, as a prison. Now she couldn’t stand the thought of staying there for any long period of time…especially if Liz was still in residence. Her forty-five-year-old uncle had never married and claimed he had his reasons for never wanting to. But that didn’t keep him from occasionally having a live-in mistress under his roof. His most recent was Liz Till­man and, as far as Margo was concerned, the woman was a real work of art with the words gold digger writ­ten all over her. Margo knew her uncle was a smart man and would eventually figure that fact out for him­self. But right now it seemed he was quite taken with Liz’s looks and body.

“It’s final. A bodyguard will be here around the clock to protect you until this madness is over.”

Margo didn’t say anything. She wondered if at any time it had crossed her uncle’s mind that they were at her house, not his, and she was no longer a child but a twenty-six-year-old woman. In a way, she knew she should appreciate his concern, but she refused to let anyone order her around.

Brenda Jackson, New York Times and USA Today Bestselling author of over 100 novels and novellas, was born in Jacksonville, Florida. She earned a Bachelor of Science degree in Business Administration from Jacksonville University. She married her high school sweetheart, Gerald, and they have two sons, Gerald Jr. and Brandon, ages thirty-six and thirty-four, respectively. She is an active member of Delta Sigma Theta Sorority, Inc. Her professional writing career began in 1995 with the release of her first book, Tonight and Forever. Since then she has written over 100 titles, which includes a made-for-television movie by BET, One Special Moment as well as the movie, Truly Everlasting. She was a 2012 NAACP Image Award Nominee for Outstanding Literary Fiction for her book, A Silken Thread; and was named Romance Writers of America’s Nora Robert’s Lifetime Achievement Award recipient for 2012.

Stay up to date on Brenda’s latest news! Subscribe to her Newsletter today!