The First Taste by Jessica Hawkins 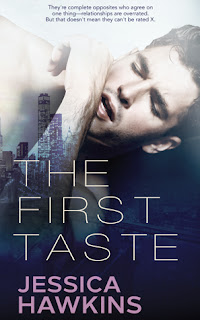 A sexy new STANDALONE romance from the author who brought you Amazon bestseller Slip of the Tongue.

Andrew Beckwith has already devoted his life to one girl—and as far as he’s concerned, she’s all he needs. The rough-around-the-edges bad boy left his reckless ways behind six years ago when his daughter Bell was born. To the female population’s dismay, he’s unapologetically single. When Bell’s mother walked out on them years ago, he vowed never to let another woman close enough to hurt them again.

Amelia Van Ecken isn’t just another woman. She’s an independent, smart, and savvy businesswoman who doesn’t have time for sex, much less love. In the midst of a drawn-out, bitter divorce, all she wants is to bury herself in work. But when sharp-tongued Amelia and stubborn Andrew cross paths, sparks fly—and burn. Two things are obvious in an instant: they want each other, and they’re from different worlds. It’s the perfect formula for an off-the-charts one-night stand. After all, it’s not as if opposites ever attract.

Slip of the Tongue by Jessica Hawkins 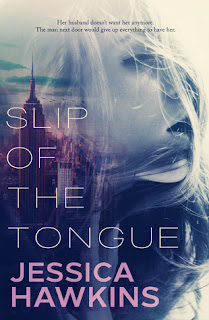 Sadie Hunt isn’t perfect—but her husband is. Nathan Hunt has her coffee waiting every morning. He holds her hand until the last second. He worships the Manhattan sidewalk she walks on. Until one day, he just…stops. And Sadie finds herself in the last place she ever expected to be. Lonely in her marriage.

When rugged and sexy Finn Cohen moves into the apartment across the hall, he and Sadie share an immediate spark. Finn reveals dreams for a different life. Sadie wants to save her marriage. Their secrets should keep them apart, not ignite a blistering affair. But while Sadie’s marriage runs colder by the day, she and Finn burn hotter.

Her husband doesn’t want her anymore.The man next door would give up everything to have her. 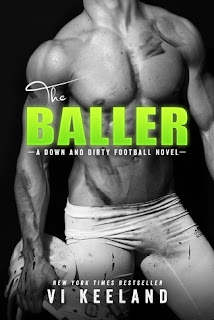 The first time I met Brody Easton was in the men’s locker room.

It was my first interview as a professional sportscaster.
The famed quarterback decided to bare all.
And by all, I don’t mean he told me any of his secrets.
No. The arrogant ass decided to drop his towel, just as I asked the first question. On camera.
The Super Bowl MVP quickly adopted a new hobby—screwing with me.
When I pushed back, he shifted from wanting to screw with me, to wanting to screw me.
But I don’t date players.
And it’s not because I’m one of the few women working in the world of professional football.
I’d date an athlete.
It’s the other kind of player I don’t date.
You know the type. Good looking, strong, cocky, always looking to get laid.

Brody Easton was the ultimate player.
Every woman wanted to be the one to change him.
But the truth was, all he needed was a girl worth changing for.
Turned out, I was that girl.
Simple right?
Let’s face it. It never is.
There’s a story between once upon a time and happily ever after…
And this one is ours.