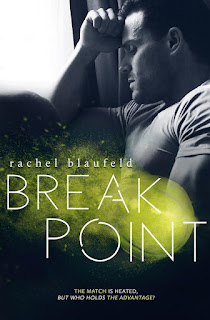 Juliette Smith, star tennis player, is starting over at a new university. Traumatized by hazing at her last school, all she wants is to attend classes, win tennis matches, and be left the hell alone.

She should have known her coach, Drew King, would be a problem from the moment he flexed his sexy-as-hell forearms.

What happens when you mix a pissed-off woman with a bunch of snooty teammates and a hot coach?

A heated match, complete with team politics and a forbidden game of singles with the coach.

Unable to admit she may be better off as a double, Jules is convinced she needs to play the game of life alone. Then life throws her a lob and she runs smack into her past.

Coach King is back, and he wants to take control of the game. But she’s not certain she wants his advice when it comes to the life she’s built.

The power struggle is on, but this time off the court.

Add Break Point to your TBR at: http://bit.ly/2fkvKPD 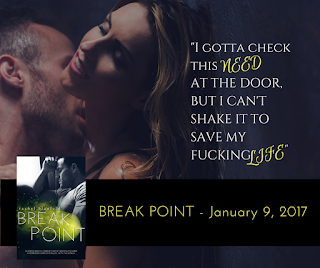 Rachel Blaufeld is a social worker/entrepreneur/blogger turned author. Fearless about sharing her opinion, Rachel captured the ear of stay-at-home and working moms on her blog,BacknGrooveMom, chronicling her adventures in parenting tweens and inventing a product, often at the same time. She has also blogged for The Huffington Post, Modern Mom, and StartupNation.

Turning her focus on her sometimes wild-and-crazy creative side, it only took Rachel two decades to do exactly what she wanted to do—write a fiction novel. Now she spends way too many hours in local coffee shops plotting her ideas. Her tales may all come with a side of angst and naughtiness, but end lusciously.

Rachel lives around the corner from her childhood home in Pennsylvania with her family and two dogs. Her obsessions include running, coffee, icing-filled doughnuts, anti-heroes, and mighty fine epilogues.

Sign up for her newsletter for the latest news on releases, sales, giveaways and other updates.
Posted by Janna at 10:30 AM