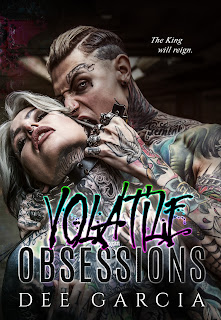 __Lux__
The streets of Miami became my home at a young age, streets that weren’t always very pleasant or forgiving. I hustled hard to get by, refused to seek help. I did plenty of things I’m not proud of either.
But I made it... Now, this is my city.
My merciless streets.
My empire.
So I don’t know who the hell Roman King thinks he is, storming in here and throwing around demands. He wants my power.
My throne.
Well, news flash for him…
Over my. Dead. Body.
I’ll wreak havoc on his life far worse than the demons of his past, demons that somehow mesh so well with my own.
He 𝒘𝒊𝒍𝒍 bow down to this Queen.
__Roman__
She bloody warned me, threatened me with war, but those threats hold no power over me.
They don’t faze me.
Summoned to aid this city in ending her era, I’m the leading pawn on the chess board meant to dethrone the Queen.
She’s vicious, ruthless, corrupt—a challenge I fancy a little too much.
So let this vow be heard today...
Miami will burn to the ashes, but in the end, it will rise, reborn from the blood of her empire. The depravity that runs through my veins will consume every tear and relish her cries for mercy.
Lux Mercier 𝒘𝒊𝒍𝒍 kneel at my altar.
The King will reign.

“What? What the fuck do you want?” I questioned in frustration as he whipped me inside the office and locked the door behind us, drowning the music out to a dull throb.
“What I want? You wanna know what I want,” he muttered through clenched teeth, backing me right into the wall I hadn’t seen. Warm hands instinctively fell to my hips, tip of his nose skating along my jaw. “I want you to stop letting Vic put his grimy little hands all over you.”
Ridiculously dazed after two point five seconds of contact, I managed to shove at his chest, jerking him off me just slightly. The look that awaited me—while satisfied to have me where he wanted me—was also completely serious. I saw red. Who the fuck did he think he was?
“You don’t ow—“
“EHHH,” he cut me off with that obnoxious buzzer sound, cocking his head to one side. “Don’t come at me with that bullshit answer again because right now, at this point time, it’s the wrong fucking answer.” He growled that last bit, and fucking hell, it was just so deep and so deliciously malevolent, I actually found myself shivering.
That damned sinister grin slid across his face because, of course, my reaction did not go unnoticed.
Feeling victorious, he assessed me closely from head to toe before he was just inches away, blue eyes blazing, his breath hot against my cheek. “Remember me mentioning I’d own you one day? Remember that, Lux, one of our many nights up on the Panorama? Well guess what? Today’s that lucky day. Newsflash for you, my naughty little Kitty Kat, I do indeed own you.”
“No, you don’t,” I bit back, struggling against him, which in turn only prompted him to press himself further against me.
“Oh, but I do,” he cooed, ghosting a hand up my sternum to my throat. You gave me this pussy of your own volition, so now, it’s mine. You are mine.”
“No one owns me.”
“No one except me, Roman—fucking—King. Say it.”
“No.”
“Say it.” His demand came with a tight squeeze of his hand, claiming my air supply, and still I managed to grit out a, “NO.”
“SAY. IT. LUX, or I’ll make you scream it.”
The threat his visual presented rooted me in place.
He could.
He would.
And I wanted him to…
Sex with Rome was sublime, unlike anything I’d ever experienced before, but we’d crossed a line. I might not have felt the need put a bullet through his head anymore, but…no, just no. Too complicated.
“Fuck you,” I muttered, trying and failing to seem unaffected.
He knew though, the arch of his eyebrow said it all.
“You did already, baby, which is why we’re having this conversation.” 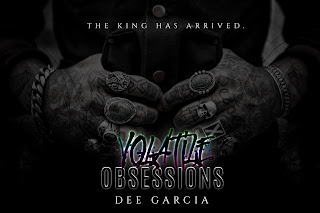 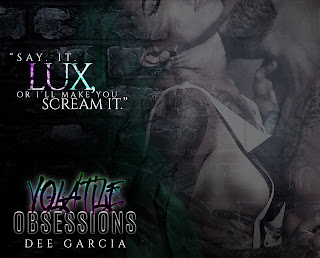 Dee Garcia is a voracious fan of romance novels and a long time lover of the written word. Her mission is to craft unique, compelling stories that will give her readers a place to briefly escape the trials and tribulations of everyday reality. With headstrong heroine's who don't need a man to stand on their own two feet, Dee hopes to leave her mark in the Indie world, one plot twist at a time. 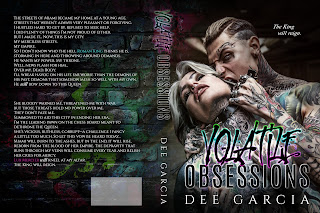