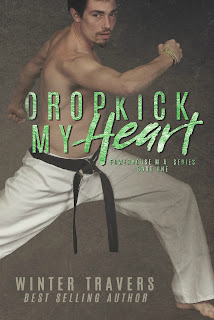 Kellan
Countless hours of practice, and enough determination to succeed no matter the cost is what has brought Kellan to standing at the door to his life coming full circle.
Life on the competition circuit was fast-paced, and exciting, but now Kellan is ready to settle down, and stay in his own bed for longer than a week.
Opening Powerhouse Martial Arts with his three best friends was just what they all needed to showcase their skills from traditional forms, all the way to show-style sport tricking.
Kellan thought he had it all figured out, except he didn’t figure in the sassy barista next door.
Molly
For seven years, Molly saved every penny she had to buy the quirky coffee shop on the corner.
Lattes, cappuccinos, espresso. You name it, Molly can make it.
Early mornings slinging coffee, and late nights thinking up the next new coffee craze leaves Molly little time to have a life. Her customers have become her family, and she would do anything to keep her customers happy.
Even venturing over to the new Martial Arts studio next door, and asking them to keep the screaming and grunting to a minimum. Surely one doesn’t need to scream so much, right?
With Molly throwing down the gauntlet to quiet down or shut down, Kellan does the only thing he can do.
Take off the sparring gloves, and show the barista just what Powerhouse Martial Arts is all about.
Strength, Style, & taking no prisoners.

Little known fact about your or well I hope to be your favorite book whore is that I have a 1st degree black belt in Tae Kwon Do.  So when I saw that Dropkick My Heart and the series was about four martial artists I was so excited because you see MMA or boxing a lot in books but not so much martial arts.  So I went in with extremely high expectations, higher than I would others because of the subject matter alone but while in the end I really really liked Dropkick My Heart it didn’t get to the level I had hoped.  I need to make myself perfectly clear the issues I had were not with anything related to karate, it was with the characters or I should say one in particular.

I had issues with Molly for a good majority of the book.  It took me a long time warm up to her character.  Now I think it is because of the way she was towards Kellan and the guys and how she thought she could in her own way bully them into doing what she wanted.  But then slowly I began to warm up to her and her quirkiness.  She was funny, sweet and in her own way adorable but and it is a big but it took a long time to make me feel that way towards her.  I was cheering Kellan and the rest of the guys on for their well let’s just say antics so I don’t spoil it.

Kellan now don’t let me have you thinking he was an angel in any of this because he wasn’t.  There were more than one occasion that I wanted to dropkick him and the guys.  I liked his overall character though, he was proud of his accomplishments in the martial art world but he wasn’t overly cocky about it.  Kellan pretty much had my loyalty from the start. Towards the end, there is a scene that really cemented my love for him, all I will say is that it is at a tournament but you will have to read the book to find out exactly what it is.

While I had issues with Dropkick My Heart I did in fact really like it a lot and am extremely curious as to having the rest of the guy’s stories.  I think Ms. Travers has the potential to make this series great, it is already off to a good start and if you are like me, a fan of martial arts then you will enjoy this book.

"The first book in a new series by the amazing Winter travers will leave you breathless." - Reader Review

"This book was so well written and so hilariously funny that I am going to absolutely devour each one in this new series from Winter Travers." - One Last Page Book Blog

"...Dropkick My Heart was laugh out loud funny, had sexy times that have you fanning yourself, and characters that make you want to know more about them." - MJ's Book Blog and Reviews 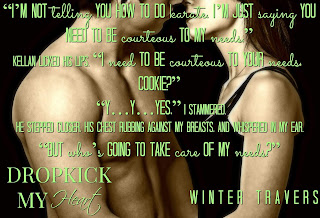 Winter Travers is a devoted wife, mother, and aunt turned author who was born and raised in Wisconsin. After a brief stint in South Carolina following her heart to chase the man who is now her hubby, they retreated back up North to the changing seasons, and the place they now call home.

Winter spends her days writing happily ever afters, and her nights zipping around on her forklift at work. She also has an addiction to anything MC related, her dog Thunder, and Mexican food! (Tamales!)

Winter loves to stay connected with her readers. Don’t hesitate to reach out and contact her. 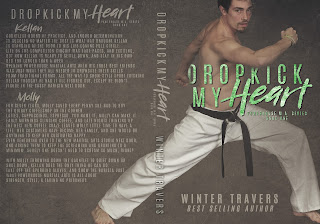