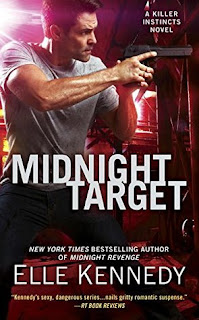 From the New York Times bestselling author of The Score and Midnight Revenge...
Four years ago, Cate’s entire life changed when she discovered she was the daughter of a supersoldier. But Jim Morgan’s overprotectiveness has pushed her away. These days, she’s working as a freelance photographer and living the dangerous life Jim never wanted for her.

When Cate snaps a photo linking a corrupt South American politician with the leader of a notorious drug cartel, her mercenary father leads a team to rescue her—only to get shot and critically wounded in the process.

As Morgan’s operatives rally together on a revenge mission, they’re faced with new alliances and old heartaches. Cate is forced to work with David “Ash” Ashton, the man who broke her heart two years ago, while Liam Macgregor and Sullivan Port resurface after years apart to finally try to deal with everything they’d left unsaid.

Soon it’s all-out war between the cartel and the mercenaries—with two couples caught in the middle of the blood feud. Love and redemption are within their reach...but first they have to make it home alive.

Every once in a while I crave a good action and suspense packed romance and I had been craving just that when I started Midnight Target.  Now I have been a fan of Elle Kennedy for years now and I will admit I usually gravitate to her other series but I love this side of her writing as well.  If you haven’t read the whole series, and I haven’t yet but will be doing that soon, you may at times feel a bit lost or confused.  I was a bit but not enough to take away from my enjoyment of Midnight Target.  Trust me there is enough action and suspense to keep you on the edge of your seat.

Midnight Target centers around the stories of Ash and Cate as well as Sully and Liam.  Holy hell Ash he is hot and is finally giving in to his desire for Cate.  Sometimes you just need that one instance to open your eyes and say you are getting what you want.  Let’s not forget about Sully and Liam, they finally get together.  I do wish that they had their own book but they don’t take away from the main storyline so it worked out well.  This is the final book in the series but I am hoping that maybe we can persuade Ms. Kennedy to give us more in the future.

If you love an action filled romantic suspense this book, and this series, is for you.  I can easily say this needs to be on TBR lists and be high up on the list because you really do not want to miss out on this great book.