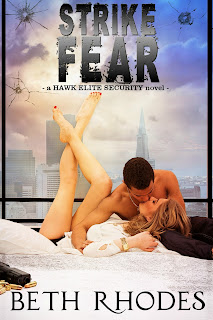 Head of the personal safety division for Hawk Elite Security, Tan is serious about teaching his clients how to stay safe. But, with a file two inches thick confirming Elizabeth Whitney as a world champion athlete, he's prepared to take on his newest assignment as the vacation he hasn't had in over five years. A little instruction, a couple hockey games on the side, and he'll be on his way to the next spoiled rich kid.

Elizabeth takes one look at Tancredo Byrnes and it doesn't matter that she can perform a triple lutz-toe loop blindfolded; clumsy becomes her middle name. Though trusting people outside her family has never been her strong suit, she finds herself drawn to the easy-going man who is supposed to make her into a superwoman. But she's been burned by those fickle feelings of attraction before and isn't about to let them ruin her life again.

As their training intensifies, the threats to Elizabeth darken, and Tan realizes that what should have been a cake walk is a fight between life and death. 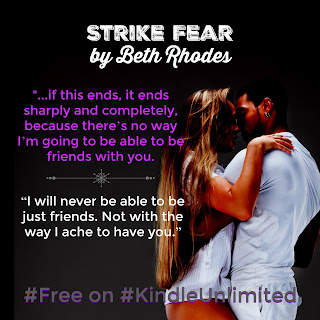 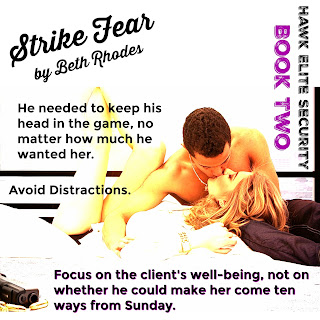 He liked women, he really did. He dated occasionally, never taking anything deeper than the surface. There had always been too much on his plate with a job in the military. And sending his paycheck home to Mom and his sister had kept him from stumbling into anything long term.

And his focus had been best utilized at work, anyway. Until now. Until he’d taken the position at the gym and begun to manage personal security, anyway. During an operation, he was part of a team. Sometimes, his new position left him alone—for long stretches of time. He found he had way more time with himself than he wanted. To think. To analyze. To regret.

He shoved aside those thoughts as she made her way out of the locker room in her black leggings—holy long legs—that had swirls of glittering rhinestones and sequins all over them. The tank top matched—black but, thankfully, free of all the crap that would scratch the hell out of him. Her shoes were tiny little white canvas boppers, also covered in shiny shit.

At least she’d had the sense to remove the expensive stuff. Her ears were bare as were her neck and wrist. “Where do we start?” she asked.

They stretched first. And he let himself be impressed by her flexibility, the obvious attention she paid to her muscles. “Do you still skate?”

“No,” she answered quickly, not expounding, as she lowered her head once more to her knees and let her hands dangle over her feet.

The job had been handed to him less than twenty-four hours ago, with little to go on except for the father’s concern and a little background. Apparently, she wasn’t going to talk either…yet. But he’d learned, sometimes it takes a while to get the client talking.

Loose now, and obviously comfortable in her own skin, Elizabeth kept her muscles warm by moving. She shook out her arms and paced. Fluid grace.

“Let’s start with a stalker scenario.”

“Maybe this guy can run, too.” Tan twisted at the waist, stretching the muscles of his lower back. “He gets you from behind. Come here.”

She rolled her eyes but did as requested.

“You’re running and he gets your arm.” Grabbing her arm, Tan pulled her against him, wrapping his arms around her chest and giving her a lift off the ground. Wow, she was light.

Immediately, she threw her head back, catching the side of his jaw. He grunted, the surprise making him drop her. She slammed her foot onto his instep, elbowed his gut, which left him breathless, then turned and kneed him in the groin.

He moaned and slowly lowered himself to the floor so he could lie in the fetal position. Holy crap. Taken down by a sparkling princess. Thank God he was the only one around today.

She leaned over, and her hair brushed against his cheek. “How about you tell my dad I passed, and we’ll call it even.”

Not in a million years, he promised as she picked up her bag and walked out the door. 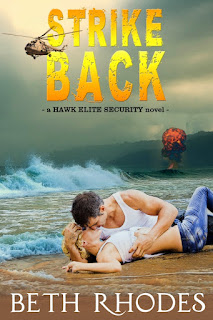 Beth Rhodes is a wife, mother, friend, and lover. She lives with her Army husband and their six children at the base of the mountains in Colorado. She loves the cold, coffee, camping, and sunshine.

Her stories are full of life, family, and love. You can find her reading just about any genre of romance, but her favorites are fast-paced suspense, where life is on the line and love is the only saving grace. She wants a book that makes her heart pound and her pulse race. 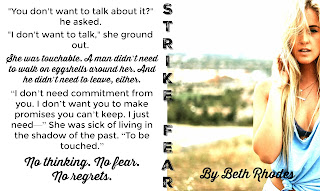 a Rafflecopter giveaway
Posted by Janna at 3:30 PM