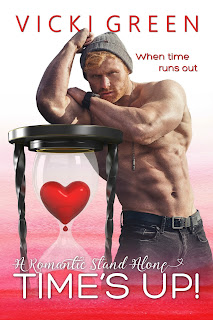 What happens when your wealthy, pretentious Italian parents create a contract for you when you turned twenty-one and now a few years later you realize you only have nine months left to fulfill it.

The terms:
Must be married and pregnant by the age of twenty-five.

The catch:
It has to be true love.

All stipulated in the contract.

The problem:
Rica has no boyfriend.
She’s not easy.
She’ll be twenty-five in nine months.

What’s NOT in the contract:
Her parents forgot to mention he must be Italian.

**This story is intended for 18+ readers.

When I read the blurb for Time’s Up! to say that I was intrigued would be putting it mildly.  A contact that you signed with your parents stating you would be in love, married and pregnant by the time you hit 25 years old to get your money from them?  This isn’t an arraigned marriage story by any means but I will say the plot was one I hadn’t read before at least not like this.  Time’s Up! is a romantic comedy that is packed with drama and a side of secrets.

While I enjoyed Time’s Up!,  I feel that some parts were too drawn out and some of the characters started to get on my nerves, the main one being Rica our heroine.  She is feisty. Stubborn and sassy but at the same time I just wanted her to be more.  And I got it you, your family and friends are Italian I don’t need to be reminded of that fact a million times throughout the book, okay maybe not a million but after a while I was over it.  Rica while a character I wanted to love unfortunately ended up being one that I barely tolerated.  Luke now he made me want to continue forward with the story.  He was cocky, he was arrogant, he was sweet and he was determined.  I wish we would have had more POVs from his character but the ones we did get I enjoyed.  He has secrets.  Did he screw up?  Yes but before you send a mob after him he didn’t do anything that bad.  I honestly felt more for him and his feelings than I did Rica’s in the book.

I think that the story was just too drawn out, I understood why the author put it in there but after a bit I just wanted it to move forward.  Certain things seemed to be swept under the rug and Rica did not take any ownership in her part of the problem and that bothered me.  Communication is key people, communication is key.  While I am not saying that I loved this one I did overall enjoy it and I think others will as well, and it very well could be it is a me not the book situation going on here. 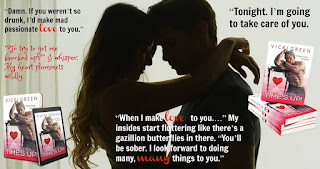 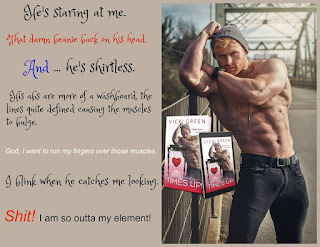 He’s headed for second base, giving me a wink. Cocky son of a.... I start running toward him, my hand outstretched with the ball, ready to tag his ass. God, what an ass. I’m a fairly fast runner since I jog all the time, but he starts pulling ahead, so I push harder. I start gaining on him and when he looks at the base, I know what he’s going to do. Just as he begins to slide.… I dive.

I’d feel a little like gloating but when I look up from my position, his head is cocked to one side and he’s smiling widely. “Feel free to stay down there a while.” He winks. I feel the heat of my blush as I push myself back from having my face right between his legs. Just like his large muscles, his cock is freaking huge! And hard as a rock. He rubs his scruffy chin. “Uh, you might want to get that dirt off. Right about here.” I give him a dirty look. 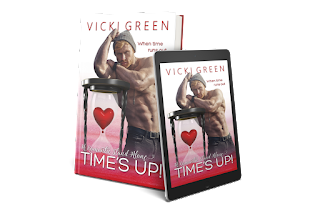 Best selling Author of Romance and Romance Suspense, Vicki lives in Kansas with her husband and two boys as well as their 3 dogs that rule their house. She loves spending time with her family and furbabies as well as reading.

Look for more exciting romance adventures in the future.