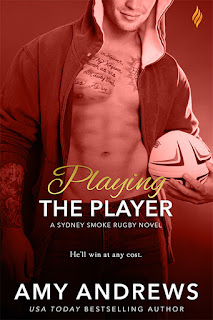 After a long history with crappy guys, high school teacher Em Newman is going man-vegan. Four months of revirginization has opened her eyes to her doormat imitation but, baby’s got spine now, and some smooth-talking—even if he is sinfully hot—rugby player, won’t be adding her as a notch anytime soon.

Lincoln Quinn loves rugby, women, and poker. And he likes to win at all three. When his team mates bet him he can’t break through Em’s resolve, he’s more than up for the challenge. But this lady has a shoebox of stipulations before she’ll even go on a date with him, much less use that mouth for kissing instead of giving orders.

Something’s gotta give but this time Em’s not settling. And Linc’s questioning everything he ever knew about matters of the heart.

Each book in the Sydney Smoke Rugby series is a standalone, full-length story that can be enjoyed out of order.

Book #1 Playing By Her Rules

This was my first book from Amy Andrews but it won't be my last.  I enjoy a good sports romance and this book fit the bill for me.  This is the third in the Sydney Smoke Rugby series but can absolutely be read as a standalone.

I liked Linc.  He definitely had the sexy factor going for him in my opinion.  He had a flirty side for sure, but he had a serious and sweet side, too.  I definitely understood the pull Em felt for him; he definitely was good book boyfriend material.  There were a couple of moments where I had to remind myself of his age-which I don't normally do in a book, but it all worked out.

Em had me chuckling as she tried to resist Linc.  The heat between them sizzled through my kindle so I knew it was just a matter of time before she gave in to the attraction.  I liked her attitude, her belief in her ideals, and her determination to stick with them.  I appreciated her growth in the book as well.

I liked the flow of this story.  I liked the secondary characters-I adored the whole team in fact.  I enjoyed them enough to want to go back and read the first two books in the series and look forward to reading what else Amy Andrews has to offer.  I would recommend this book.

I enjoyed this one. Em and Lincoln were fun, and funny, together and separately. I liked who they were as people, I liked how dedicated they each were to making something with them work...even though it took a bit for them to get on the same page with this.

Sometimes, it is fun to read a book that is easy, that flows, and that you enjoy. There was nothing about this book that made it all that full of angst, and the issue with the 2 of them was both a little predictable and also felt real at the same time.

The writing was strong and the characters both realistic and consistent. I liked the mix of gentleman and player in Lincoln, and the mix of free spirit and traditional woman in Em.

And, I loved her name...once it was finally revealed.

The pacing was mostly strong, you were able to follow along without feeling like the book dragged at any point. There were, however, a few places where I thought the narrative skipped over an event that I would have liked to have been present for, and that made it a little tough to filly invest in this one.

I didn't read the 2nd in the series, and this is enough of a standalone that you don't need to in order to be able to follow it.

Linc rang Em at the same time he had the day before. Every part of him ached from a morning of gruelling training, but in a good way. The kind of way that made him grateful for his fitness, that made him feel alive. And pumped.

She had one of those teacher’s voices. Firm but kind, with just enough fuck-with-me-and-I’ll-send-you-to-the-principal edge to keep a guy in line. That kind of voice that had never really worked on him when he’d been in high school, but then he’d never had a teacher as sexy as Em Newman, either.

He might have turned up more often if he had.

“I think I’ve been going about this all the wrong way,” he said, picturing her sitting at her desk, her mouth pressing close to the phone receiver so she wasn’t overheard.

“I’ve been going for traditional names. But it’s not Ermintrude. Or Emma. Or Emily or Emmeline. So I’m thinking now your parents might be hippies, and it’s actually something like Ember. Or Emerald.”

There was a long pause then a deep sigh. “Why do you care?”

“I want to be able to call you by your real name.”

Another heavy sigh. “Are you just going to ring me every lunch hour?”

“Don’t you have...push-ups to do? Or something? Balls to kick. Tries to score?”

He grinned. “Training finishes at twelve, and in case you haven’t noticed, I’m trying to score right now.”

“Linc...” He’d have to have been deaf not to hear the exasperation in her voice. “I have papers to mark.”

“You are hell on a man’s ego, Miss Newman.” He loved the way “Miss” rolled off his tongue, and a dozen dirty thoughts about naughty teachers with crazy curls bending over to help a student with a problem, their shirts gaping to reveal pretty bras flitted through his head with a predictable effect on his dick.

Who knew teachers could be such a fucking turn-on?

Certainly not a guy who’d spent a good portion of his life avoiding them at all costs.

She snorted. “I have a feeling your ego couldn’t be brought down with an elephant gun.”

He laughed, not even bothering to try and dissuade her from the accuracy of her statement. “The Nerd Chicks are in town on Friday night.”

She didn’t say anything for a beat or two. “You know who the Nerd Chicks are?”

Linc had spent a long time online last night trying to come up with something that’d blow Em’s mind. He’d finally found An Evening with the Nerd Chicks. Apparently they were three women with science backgrounds who ran a popular YouTube channel discussing all things science and had taken their show on the road.

“We should go together.”

There was another pause, but he thought he could hear her breath hitch. “Top marks for trying, Linc. But it’s sold out. It sold out in about half an hour.”

He definitely heard her breath this time. Hissing slowly out this time in a long exhale. “Thank you but...no.”

“No? Did I mention you get to meet them afterwards?”

A soft noise that sort of sounded like a whimper or maybe even a low growl caressed his eardrum. “I said no.”

But it was the most unconvincing no Linc had ever heard. He could practically feel her conflict. “Come on, Miss Newman,” he pressed. “Why deprive yourself?”

“Because, Linc,” she muttered, her voice terse, “afterwards I’ll probably fuck you in your ridiculously sexy car.”

Linc’s pulse spiked at her direct prediction. Even if she had sounded utterly depressed over it. He laughed. “And that’s a bad thing?”

“Okay. What if I promise to not let you fuck me in my car? Or anywhere else?”

It wasn’t going to win him the bet—but he really didn’t give a fuck anymore. Linc just really wanted to take her to the show. Because she obviously wanted to go.

She snorted. “I can be very persuasive.” 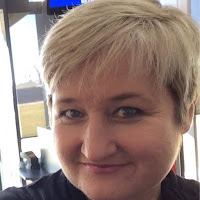 Amy is a multi award-winning, USA Today best-selling Aussie author who has written over sixty contemporary romances in both the traditional and digital markets. She's sold over two million books and been translated into thirteen different languages including manga. Her sizzling books feature lots of sex and kissing. She likes to make her readers tingle, laugh and sigh and please don't mess with the HEA!

At sixteen she met a guy she knew she was going to marry and she did. They're still living out their HEA and have two new adult children who are spreading their wings and flying the coop. She loves good books, frequent travel and great booze although she'll take mediocre booze if there's nothing else.

Amy spent six years on the national executive of Romance Writers of Australia including a two year term as president and after many years of unofficial mentoring of emerging writers, now runs her own manuscript assessment business, Word Witchery, which specialises in romantic fiction. With unique insight into what makes a story that sells, Amy aims to help every manuscript shine.

She lives on acreage on the outskirts of Brisbane with a gorgeous mountain view but secretly wishes it was the hillsides of Tuscany.