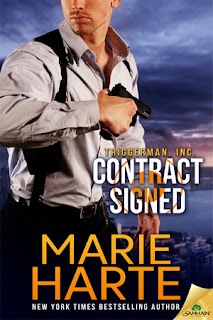 Noel "Ice" Cavanaugh's method is foolproof. Get in, do the job, get out, melt away without a trace. Chill out until his next mark is assigned. Neat. Tidy. No mistakes.

This time, though, something isn't right. Two somethings. First a random attack that feels not-so-random. Then he discovers someone's left a baby on his doorstep with a note claiming it's his. And the sexy neighbor who found the boy first has too many questions in her eyes to ignore.

When her handsome, mysterious neighbor suddenly asks her out on a date, Adeline Rose has suspicions he's fishing for "help" with his bundle of…joy? By date's end, she's convinced NOel's just as distant as he seems—until a scorching goodnight kiss ends with sex against the nearest wall, the heat between them burning away all thoughts of careful.

Now Noel has more than one problem on his hands. Splitting baby duty between three badass assassins, figuring out how to fit more time with Addy into his no-room-for-error schedule…and keeping both of them safe from the danger he's increasingly sure has followed him home.

Warning: Beware a killer with a heart of gold, a baby who needs constant changing, and unrequited love that's actually quite…requited.

Award-winning author Marie Harte has been writing professionally since 2005. She's both a NY Times and USA Today bestselling author and has written over 100 books and counting. Marie writes books with heat, humor, and character.

She writes independently and for several publishers, to include Sourcebooks and Samhain. Though currently writing contemporary romance, she also writes paranormal and romantic suspense.

Before turning to writing full-time, she earned a B.A. in English from Pennsylvania State University and spent several years in the United States Marine Corps as a communications officer.

Marie currently lives in Central Oregon with her family. There's nothing she likes more than finding a good book to read and a great cup of coffee to drink.