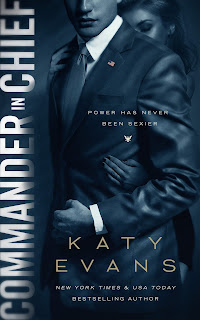 We fell in love during the campaign.

The stakes were high.

Reputations could have been ruined.

Now the man I love is the President of the United States of America.

And its not my vote he is after.

He wants it all.
My heart. My body. My soul.

He wants me by his side.

In the White House.

Normalcy will be gone from my life, privacy forgotten.

I am only twenty three. I just wanted to play a part in history. But it seems like history wasn't done with me. The part where I lost my heart to Matthew Hamilton? It was only the beginning…

I am not sure what happened, but I did not like this one as much as the first in the series.

It wasn't bad, I just felt that it glossed over some events and skipped over others, so I didn't have the depth that I was hoping for.

Matt had reasons for not wanting Charlotte to live the life that he watched his mother lead. Charlotte was arfaid of the scandal of their relationship. There was the build up to both, but I felt the resolution was just sort of tossed out there, and that it was never dealt with. At least, it was not really fully dealt with in a way that I believed. I do get it, he missed her and that changes perspective, but I never was totally on board.

I did enjoy the writing, I liked the glimpse into their life in the White House. I liked Matt and Charlotte, and I wanted them to work out and I was glad they got their happily ever after, as they deserved it.

The book made me wish Matt Hamilton was really the president of this country, made me believe that he really could do things, and make things happen. I liked him. I liked that there was no real drama with them, that the author allowed their relationship and them working it out together, to be the focus.

I do recommend this book, overall.

So let's be honest here, after Mr. President I was going insane waiting for Commander In Chief. I needed to know what was going to happen with Charlotte and Matthew. I had such very high expectations and sadly they were not met.

Charlotte seemed to have a personality switch with an 80 year old woman. I can't say specifics because I don't want to give spoilers away but if I heard her refer herself and Matthew as certain titles let's say once more time I may have planned an assassination myself, of Charlotte that is. She turned into a prude and just totally took away from what could have been an amazing read. I loved her in Mr. President but in Commander In Chief I just wanted her to go away. Far far away.

Matthew I still loved and while he at times as well made me want to slap him upside the back of the head, I still enjoyed his character. I wanted more of his POV I needed more since he was now Commander In Chief I wanted it to be more about him.

The writing in this one just wasn't on the same level as Mr. President. Too many issues were rushed passed or swept under the rug and I wanted completion more than once. I have loved Katy Evans ever since I read Real, but this one just wasn't up to the level I have come to expect from her. Overall it was okay but could have been so much better. 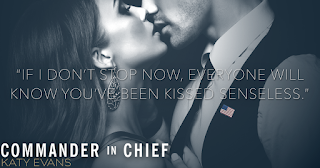