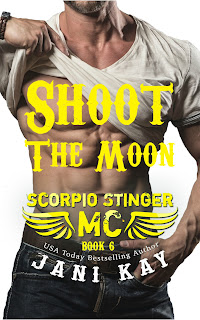 Meet the anti-hero and the spitfire in SHOOT THE MOON.

DEFINITIONS:
*
Shoot the Moon
1. To attempt the near-impossible.
2. To take a risk for great rewards.
3. To set one’s sights high and try for something that one wants badly, but for which realistically the probability of success is not good.
*
anti-hero
1. Morally ambiguous and flawed hero who is hard and jaded and not entirely pure but has hidden noble intentions.
2. A bad boy with heroic qualities.
3. Individuals who often possess dark personality traits.
*
spit·fire
[spĭt′fīr′]
1. A person, especially a girl or woman, who is of fiery temper and easily provoked to outbursts.
2. Wild & free. Someone whose angry words sting like fire. Considered strong emotionally & spiritually.
3. Someone who you don't want to be on the bad side of.

Razor has some heavy boots to fill. He’s always lived in the shadow of his brothers and he’s sick of it.
Lexi is wild and out of control. She won’t be told what to do and she has a filthy mouth that’s gotten her into more trouble than she can admit.
He wants her from the first moment he lays eyes on her.
She only has eyes for another man she can’t have.
He’s determined to claim her and make her his.
She fights him tooth and nail.

Is Razor the one man who can tame Lexi and make her his?

Every once in a while a series that you loved slowly starts to be one that you don’t so much like you used to.  I was hoping that Shoot The Moon would have my love of this series returning after I didn’t like the previous book, but sadly I just didn’t like it and I will give the exact reason by.  Lexi.  She ruined this book for me, I haven’t liked her at any point during this series but I had high hopes that with this book I would have found something about her that I could like.  Yeah, that didn’t happen, if anything I hate her more for how she is to Razor. She was selfish, immature, played too many games, and well in my opinion just trash for how she treats other people.

Razor is what kept me reading because even though in previous books he comes across as an asshole, you start to understand a little bit why in Shoot The Moon, and I have a theory about something else but won’t say just in case I am wrong.  Razor was a dirty talking, alpha who is hot in the bedroom.  I ended up loving him, faults and all.

I don’t know if Ms. Kay plans on writing more books in this series and I can’t say for sure if I would read them and that makes this book whore sad because I really did love this series.  I may if she does a book about Ox, because I have a feeling there is more there that we know. 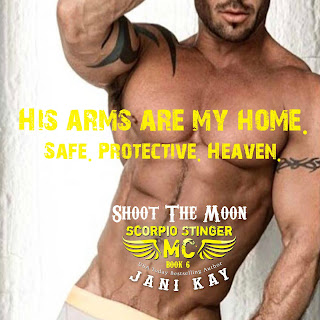 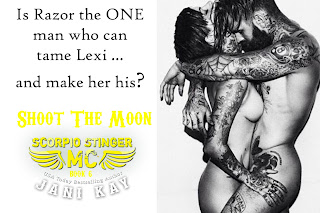 Jealousy was an evil monster and I just couldn’t get a fucking grip on it. Leaning over the sticky bar counter that had seen better days, I growled next to her ear. “Ryder’s cock belongs to Jade. He doesn’t see you sweetheart, he only has eyes for her.”

Her cheeks reddened and her eyes blazed as she shoved me away, nearly knocking my glass over. “Fuck off, Razor.”

“Only if you come with me.” I took a sip of my beer and watched her pour another for Ox and slide it across to him. My lips curled into a wicked grin. “I think you’ve forgotten how a real man fucks his woman. Let me remind you.”

It had been a while since I’d been inside her warm and tight little pussy and my dick ached for her. Who was I kidding? Every fucking inch of me ached for her sexy body.

“When will you get it through your thick stupid skull that I don’t want you? I’m never going to fuck you again, Razor, so quit wasting your time.” She looked around the club room. “There are plenty of whores who’ve told me all about your new cock piercings, and I must admit that intrigued me, but it’s never going to happen. So suck it up and move the fuck on.”

I loved a fucking challenge. A grin of satisfaction spread across my face. The pain I’d endured a few weeks ago to get pierced was worth every second if it caught Lexi’s attention. I knew it would, and that was exactly why I’d done the deed. She’d loved my thick and heavy cock before, but this was in a different league altogether.

“You like pierced cock, don’t you? Well, babe, you’re gonna salivate when I fuck that dirty little mouth of yours. You don’t know what you’re missing, but I’m going to show you.”

Her lips parted and her attention was glued to my crotch as if she had x-ray vision. I could practically see her brain ticking over as her eyes gleamed. The fact I’d given it to other girls and not to her would piss her the fuck off even if the little bitch wouldn’t admit it.

“I’m gonna have you scream my name,” I smirked, “you’ll never want another cock as long as you live. What’s the bet one look at my piercings and you’ll wanna wrap your lips around it and suck me off?”

She laughed, her whole body shaking so that the tops of her tits jiggled in her low cut top. Lexi had a pair of knockers that could send a man to war. I’d had the pleasure of sinking my teeth into the soft white flesh and the memory alone made my cock throb.

“Jesus, you’re such an over-confident asshole. Guys are practically tripping over their dicks to fuck me and you think I’m worried about yours? Get over yourself.”

She turned her back to me and placed the glass she’d been polishing for the last three minutes on the shelf with the others. For a MC club, we had the shiniest fucking glasses of them all and it was kinda embarrassing. If only Lexi used her polishing skills better by rubbing my dick, I’d be happier.

I wanted her and I’d do any-fucking-thing to make it happen. 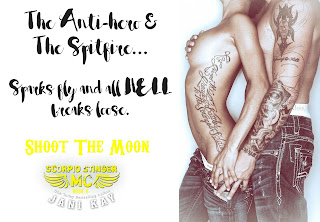 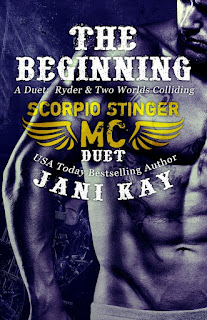 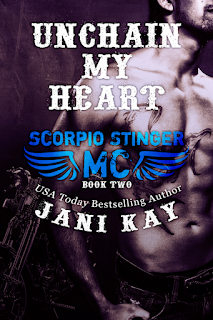 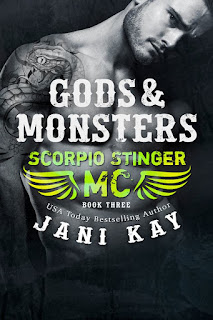 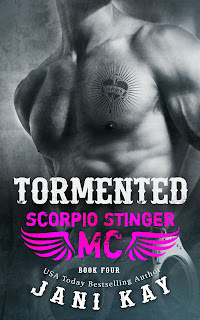 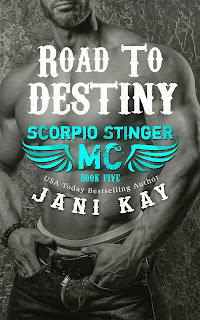 USA Today Bestselling Author - Jani Kay lives in Western Australia within a ten minute walk to the beach which is one of her favorite places to chill out.

She has been a bookworm all her life - as a voracious reader, she would gladly spend her last dollar on a book. She is always fascinated that for the mere price of a book (often less than the price of a coffee!), she can escape her life for a while and see through someone else's eyes into their world.

Jani loves the colour red, is a fiery Aries, is impatient and always storming ahead with those ram's horns, bashing her head...she has a wicked sense of humour and loves laughing.

In her 'other' life, Jani is a business woman and a scientist - a creative scientist though - she formulates skin care products and brews up concoctions in her laboratory...

She has 2 beautiful children who have grown into amazing young adults and Jani is very proud of them.

Besides reading and writing, her favorite 'thing' is traveling and drinking cocktails on the beach while watching the sun set over the ocean (Sex on The Beach anyone?).

Above all, she believes in Kindness, Karma, Miracles and Magic...