Release Blitz! In The Ring By Rie Warren 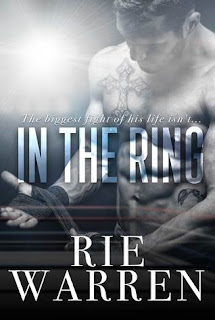 The biggest fight of his life isn’t . . . In the Ring.  The bright lights. The roaring crowd. The chance at a championship belt. The not-so-little secret Liam Shaughnessy—the Bonny Bruiser—is fighting to keep tucked far away.  Liam got the pussy pounded out of him on the mean streets of Cin-city—the other Sin City. The oldest in a Catholic clan where his da never pulled any punches, he went from geek boy to the golden boy of the boxing world care of his fists. Liam’s on the fast track to having it all . . . all except the one man he wants. Michael Fairweather makes pretending to be hetero goddamn difficult for Liam. The man is blond and beautiful and just so happens to be Liam’s trainer. With a penchant for doing shirtless yoga, giving midnight massages to loosen Liam’s muscles, and sometimes even taking it out in the ring with him. To say Liam has porn-style fantasies about Michael is an understatement. Michael’s out and proud. Liam’s only proud of what he can do in the ring. He can’t risk his career, least of all for someone unavailable. Michael has a lover. Liam has the lies he lives every day. And when his money-grubbing manager gets involved as the title win approaches, Liam doesn’t know what hit him. Fight to win. Fight with honor. It won’t be easy, but that’s okay. Nothing worth fighting for ever is.

I had been in the mood for a m/m romance and I am so glad I decided to sign up for In The Ring, because it satisfied my craving and I liked it.  It was steamy, it was sexy, hell let me just say there are times that it is hot.  But it is also so much more.  It had angst, it at times was sad; it had depth and characters that were well developed.  Liam and Michael at times will have you pulling your hair out, wanting to slap them in the back of their heads and at others have you needing something or someone to release the umm let’s say tension they build up in you.

Rie Warren at times is a hit or miss author, but In The Ring was a definite hit for this book whore and one that I not only recommend but am looking forward to more books in the series. 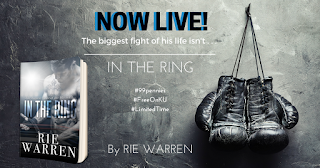 “You boys ’bout done?” the ref called over.
I breathed long and deep, peering through damp hair at Michael.
He shook his head. “Nah.”
The total body torment went on and on. Neither of us cried mercy. If he was pissed off, so was I. I just wasn’t sure what I’d done to make him go all pow-pow-pow on me. I didn’t really much care. The scent of his clean perspiration was as much of an aphrodisiac as the visual of his sweating body.


I blocked a vicious jab to my face. “You’re being a dick.”


He spun away before my fist connected with his stomach. “Back atcha.”
If he wanted me, he sure had a funny way of showing it. Killing someone via sheer bodily torture didn’t usually lead to love scenes or make-out sessions. Anya was way the fuck off the mark there.
“What’s your beef, bro?” I gasped after a particularly stinging punch.
“I think you should be more discreet.” He whipped his head out of the way just as my left hook whistled past.
“Huh?”
“With Anya. And the other women. Or all the women, if you really like Anya.”
“Kidding me?”
He jogged in front of me on his feet. Left, right, left, right. “Nope.”
“This is about Anya?”
“Yep.”
“Bull and shit.” I kicked his legs out from under him and followed him down to the mat.
I didn’t cock my fist to beat his face, but only because it was too pretty to injure.
I restrained his massive thighs with my knees. “You’re beginning to sound like Dev.”
“Call! That move is not allowed,” the ringside ref shouted.
“’S’okay. We’re not playing by the rules here, are we, Michael?”
“Nope.” His hips bucked up, and his crotch hit my growing hardness.
Holy shit.
I aligned my torso with his. Lowering myself another inch over him, I imagined Mikey bare and begging beneath me, our cocks thrusting together.
“Dev’s a slick Mick.” His chest pumped up and he tried to push me off him.
“He’s not even a true Mick and PS. that’s an insult to my Irish upbringing, preppy motherfucker.” I pushed down on his shoulders.
“Get up, you big bastard.” With no warning at all Michael spanked my ass hard.
A resounding smack rang through the air.
His eyes widened.
Mine almost rolled back in my head.
That was so hot. I’d never imagined him slapping my ass before.
I pumped against him once then reared back in horror.
Finally the pinched-sphincter expression he’d worn all day relaxed. He licked his lips in a slow motion move I wanted to repeat with my tongue on his mouth.
“Come on, man. Let’s hit the showers.” He bucked against me one more time, and I swear to fuck there was an extra, slow-grinding motion to his hips.
“What?” I croaked.
“You stink, you fucker. Get off me so we can get showered up.”
Oh yay. Because both of us getting naked with water and suds is a great idea. You’ll drop the bar of soap between my legs and stoop down to scoop it up . . . 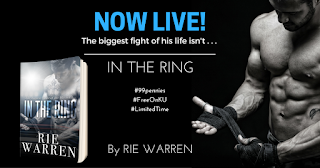 I inhaled and closed my eyes, soaking in the feel of Michael touching me, so close. He moved away, leaving me with a cold wash of air in his wake. Around the corner, a shower turned on, and when I looked again, Michael was gone. His discarded clothes sat on the bench in front of me.
I hated this feeling, this vulnerability and insecurity inside. Everyone expected me to climb higher, do better, be bigger—never weak. I wanted to be less than what I was for just one minute. More than I was, in someone else’s eyes.
I padded naked to the showers. There before me was Michael, back-to, soaping up. Foam ran down his traps, delts, glutes, quads.
Michael spun around. Suds, chest, cock, balls. “You checking me out?”


“Don’t.” He slinked forward, and every effort I’d put into shutting this unwanted thing down melted away as his hand curled around my bicep.
My body was on fire for him. “Michael—”
“Don’t,” he repeated, running a hand down my bare chest.
My heart skipped, and my cock surged. Sensation weakened me, the sheer sexiness of his wet touch swirled inside my tummy, gripped my groin like a fist.
I stepped inside, under the hot rain of multiple showerheads. My erection leaped to my belly, big, hard, unmistakable. Diamond droplets of water slid off Michael’s hair, dripped into his eyes, and ran down his chest. Down below, the torrent gathered in his curly golden pubes that circled the base of a shaft that reached upward. Pink, wrapped in pulsing veins, the entire picture of his cock was so much sexier than any man I’d ever fucked or any porn I’d ever watched.
“You are gorgeous, you know that, right?” Michael stood so close his heat clung to my skin.
“I . . .”
Tilting my chin, he brushed his knuckles against the black stubble on my jaw. “Liam, are you just curious—or gay? Because this”—his fingertips drifted down my abs which jumped on contact—“is really dangerous.”
My skin burned from his touch. Heat scorched down to my cock. “No.”
“No what?” He reached low.
His thumb rubbed just beneath the flared head of my dick.
I shook my head, then nodded, trying to get closer to his reddened lips. To feel them on mine.
“No, you’re not gay? No, you’re not curious?” His tongue darted to my earlobe.
My hands clamped onto his biceps.
“No? You’re in denial?” His thick whisper trailed along my neck.
I wrapped one hand around his hip, slick and wet, and the other into his hair. “Kiss me if you wanna find out.”
Michael gasped. His lips parted and found mine. Not like a girl. Nothing near a woman. Stubble, rough mouth, harsh groans, all man. But for all the force our bodies contained and all the months of desire coursing through me, our first kiss was sultry, liquid, languid.
“Ahhh.” I leaned away to look at him. 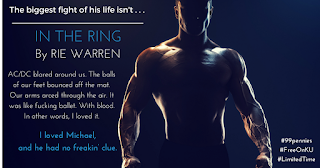 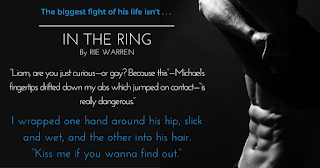 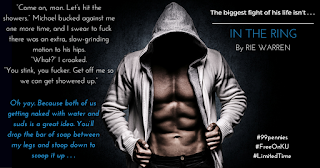 Rie is the badass, sassafras author of Sugar Daddy and the Don’t Tell series–a breakthrough trilogy that crosses traditional publishing boundaries beginning with In His Command. Her latest endeavors include the Carolina Bad Boys, a fun, hot, and southern-sexy series.

A Yankee transplant who has traveled the world, Rie started out a writer—causing her college professor to blush over her erotic poetry without one ounce of shame. Not much has changed. She swapped pen for paintbrushes and followed her other love during her twenties. From art school to marriage to children and many a wild and wonderful journey in between, Rie has come home to her calling. Her work has been called edgy, daring, and some of the sexiest smut around.  You can connect with Rie via the social media hangouts listed on her website https://www.riewarren.com. She is represented by Saritza Hernandez, Corvisiero Literary Agency. 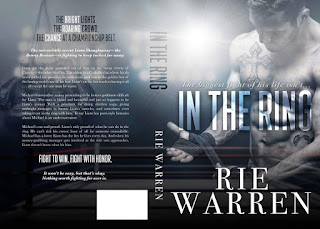