"I met her at an all-time low . . . the worst night of my life—a time I never wanted to remember."
"It was a night I could never forget."
"When it came to women, I swore I was done with wishful thinking. Ball and my coaching career were all that mattered."
"I reminded him it wasn't."
"She was everything I was afraid of."
"He was everything I'd ever wanted."
"She was fire—an irresistible piece of southern heaven that I couldn't stay away from.
"He was smoke that clouded me in every imaginable way."
"And the sex . . ."
"Dear God, the sex . . ."
"I fell hard, and she gave me hell at every turn."
"I made a promise I was hell bent on keeping."
"And you kept it."
"Hell yes I did."
"Fuckin' A."
This is a SPORTS ROMANCE and can be read as a stand alone.

Major Love By Kate Stewart was another home run.  I loved Anything But Minor but I think Major Love was a grand slam!  Andy will have your heart breaking for him, for how he feels after his heart is broken by Kristina, who I never liked anyways.  Andy is the good man we all hope for, even if at time it’s not smooth sailing, deep down he is the one that loves hard but is loyal as well.  April was a spit fire with some of her own issues, some that I think weren’t wrapped up like I had hoped but didn’t take away from my love of Major Love.

Major Love is funny, it is emotional, it will have you close to tears one minute and the next a huge smile on your face.  The relationship may have started off as a slow build but quickly turned into something hot.  Puddin and Moon Pies aside (read the book and you will understand) I loved how Andy and April were perfect for each other.  I do wish the Kristina issue was solidly put to rest but maybe even though I don’t like her that she will get a book so she can redeem herself.

Major Love is one I highly recommend and I am curious to see who the next book will be about if Ms. Stewart continues on with more sexy baseball players. 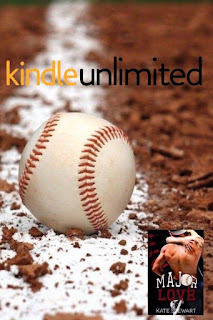 A native of Dallas, Kate Stewart now resides in beautiful Charleston, S.C. She lives with her husband of 10 years, Nick, and her naughty beagle, Sadie.
Kate moved to Charleston three weeks after her first visit, dropping her career of 8 years, and declaring the city her creative muse. Since the move in 2010, Kate has written and published several novels including Room 212, Never Me, Loving the White Liar, The Reluctant Romantics Series (The Fall, The Heart, The Mind) and The Balls in Play series (Anything but Minor and Major Love.)
Kate writes messy, sexy, angst filled romance books with 'hard to get' happy endings because it's what she loves as a reader. She has a scary addiction to chocolate milk and a deep love for rap music specifically the genius known as Marshall Mathers.
In addition to her addiction to romance, Kate also lets her alter ego take over on occasion and writes erotic suspense under the pen Angelica Chase.

Check out Kate's works as Angelica 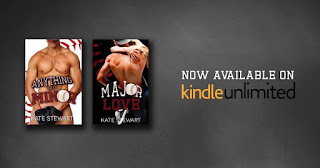