Release Blitz! For The Bear's Eyes Only By Kathy Lyons 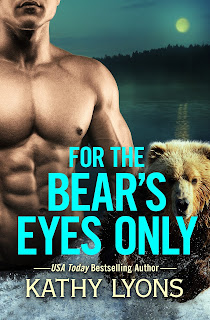 The third book in a wild shifter series from USA TODAY bestselling author Kathy Lyons.
Life as Alan Carman knew it is over. After he was captured and tortured by a mysterious enemy, the lawyer’s latent grizzly-shifter DNA was triggered. The old Alan is gone, and in its place is a terrifying vicious beast that lives and breathes for revenge. He will track down the person who did this to him—and it’ll be the last thing he ever does.

Tonya Kappes refuses to let Alan run headlong to his death. A bear-shifting deputy—and the Gladwin Clan’s beta—Tonya faces Alan with one weapon: the love that’s lingered between them since they were kids. But the idealistic man she knew has changed…into something raw, primal, and unbelievably sexy, igniting every lustful cell in her body. And, if Alan can’t learn to love the beast inside himself, maybe he can love the animal in her.

I will be the first to admit Tonya is NOT or I should say was not my favorite person leading into this book, I just haven’t liked her since the very beginning, but maybe it was my mood, maybe it was how she was with Ian, but I really warmed up to her character.  Ian was the unshifting shifter, he couldn’t shift but after what he goes through his dormant shifter genes start to wake up. I could understand why Ian was as upset as he was; I would be as well, and even though I may have wanted to slap him upside the back of his head a couple of times I still really enjoyed his character.  This book really shows that sometimes the person you want isn’t the one who is actually for you.

For The Bear’s Eyes Only was a great way for me to spend an afternoon reading, I really liked it and I think you will as well. 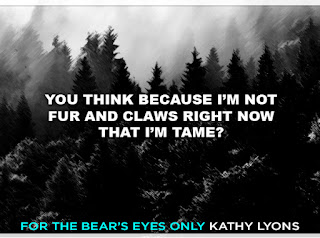 He stared at her and shook his head. “You think because I’m not fur and claws right now that I’m tame? That I won’t tear right through you if you try to Tase me again?”

She held up her bare hands, spread wide. “I don’t want to hurt you. I want to talk to you. Come home with me. Please. There are...things we need to talk about.” She’d almost said more. She’d nearly told him about how much her bear was right now pulsing with want. How his scent was oddly compelling even at its worst. About all the confusion that he created inside her. But she was on an open mic with Mark on the other end. She just couldn’t force herself to be that vulnerable with another man listening in. So she swallowed the full sentence and settled for pleading.

He was still stroking her jaw, the caress of his thumb gentle and soothing. Hell she was so tired right now, a little tug from him and she’d melt into his arms. It didn’t make sense. She was a rational woman, and Alan wasn’t the easy man she remembered. He was volatile and dangerous. But apparently that made her grizzly wet and needy. Maybe she did have a thing for monsters.

“When was the last time you slept?” he asked.

She shook her head. “Not until you’re safe.”

He tugged her closer with just the edge of his nails. They weren’t claws just then. There was no pinprick to his touch. Just the blunt edge of his fingers tugging her forward and she went willingly. “I’m not the one in danger,” he murmured.

“Bullshit,” she answered. But that was as far as she got before his mouth was on hers. Hot. Possessive. Desperate. It was like he was taking everything he could get before it all disappeared.

She met his tongue with her own, arching her neck and dueling with him. Her hands found his shoulders, and she gripped him, dragging him closer or holding on to him for support. She wasn’t sure which. And while her heart exploded into a feverish beat, her mind ceased yammering. It had been full of words and strategies, ways that she could convince him to come back with her. But at the first press of his lips, they were silenced. This was what she wanted. This was what they both needed. So she kissed him back, and in the midst of his desperation, she tried to reassure him.

Yes, she said with teeth and tongue. Yes, I want you, too.

Then he was gone.
About the Author:

Kathy Lyons is the wild, adventurous half of USA TODAY bestselling author Jade Lee. A lover of all things fantastical, Kathy spent much of her childhood in Narnia, Middle Earth, Amber, and Earthsea, just to name a few. There is nothing she adores more than turning an ordinary day into something magical, which is what happens all the time in her books. Winner of several industry awards including the Prism-Best of the Best, Romantic Times Reviewer's Choice, and Fresh Fiction's Steamiest Read, Kathy has published over fifty romance novels, and she's just getting started. Check out her latest news at KathyLyons.com.

Add For the Bear’s Eyes Only to your shelf on Goodreads: http://bit.ly/2dE8MlW