Blog Tour! Hell And Back By Natasha Madison 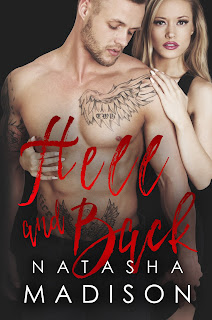 Meeting him was a fluke. Dating him was a mistake. Watching him become a drug addict put me through hell. Running was my only option.

***
I'm running from my demons and when I find out she's trying to escape her past, I know what I have to do.

One broken cop. One woman fighting for her life. A fragile love.

Sinister secrets that threaten to tear them apart.

They've been to hell. The hard part will be finding their way back together.

Hell And Back is the absolute perfect title for this book because by the time you are finished reading it you will think that is exactly where you just came from. The plot twists and turns will keep you on the edge of your seat and even when you think you know everything, you don’t! There are plenty of what the fuck moments, as well as kindle throwing, author cussing, anger inducing, wanting to kill an asshole moments just can’t be described. I won’t give anything away but this book does have some darker moments, so if you do have some triggers you may want to be prepared because some of what you read will have in crying out in pain for Bella and Lilah and what they have gone through. Jackson was the strong hero that this broken heroine needed; I loved him and the way he was there even if Bella pushed him away. The pain and healing that all of these characters go through was beautifully painful. Now there is one character who did not earn redemption for me, I won’t say who but Ms. Madison is well aware of my feelings on that one.

Hell And Back may only be the second book that Natasha Madison has written and it is very different than her previous book, but I am very impressed by her writing and the diversity she is showing in the types of books she is writing. Hell And Back is an emotional, hear breaking and healing story that I highly recommend. 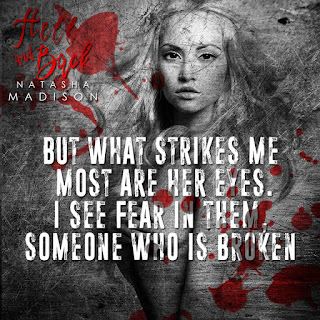 I pull up in my driveway looking over at the house. What I see pisses me off.

Here she is in a long-sleeved shirt, long pants, hat and glasses pushing a brand new lawn mower.

I make sure I check my temper before I walk over. Right before I cross the street the little girl on the front porch stops me mid step.
She looks like just like her mother, just a smaller version. She is sitting on a plastic little table, that they probably just bought, coloring.

“I told you I would cut the grass.” I try to sound casual, but the blood in me is boiling, it must be ninety-five degrees outside, and she’s wearing enough clothes for a trek across the frozen tundra.

She looks up “I also said I got it, and I would be doing it myself.” The little girl from the porch makes it to her mother and hides behind her, yanking on her pant leg.

The fearful look that she gives me is just like her mother’s. I crouch down, getting eye-to-eye with her and say “Hey there, beautiful. What’s your name?” She doesn’t reply, and instead she lowers her gaze so she is looking at her feet. “I’m Jackson,” I reach out my hand, but drop it when I know she won’t take it. I gesture behind me, as I say “I live in that house right over there. I used to know your great grandma.” I’m trying to draw her into a conversation with me, but nothing I say engages her.

“It’s ok baby, you can tell him your name. Nan used to make him cookies, so you know what that means, she must have really liked him.” She rubs her daughters shoulder.

“I’m Lilah,” she says in barely a whisper.

“That is the most beautiful name in the whole wide world. You’re lucky to have such a beautiful name.” She smiles at me, right as a car back fires. She yells and puts her hands to her ears.

Two things happen at the same time, her mother grabs her and runs toward the house, and I vow to protect them.

“Wait,” I rush after them and make it right to the door before it’s closed in my face. I stand there inside the house and watch them rushing to the corner and hide.

Two broken girls protecting each other against some monster of the outside world. I walk up to them “It’s ok, it’s just a car, it was nothing but a car.”

“Lilah, baby it’s ok, it’s ok. I’m here. It’s ok baby girl, were safe.” She is trying to comfort the little girl who is sobbing quietly in her mother arms. “No one is here baby.”

She looks over at me, our eyes meeting for one minute before she lowers them again.

“Look it’s ok, it’s just Jackson. There is no one here, baby.” She rocks Lilah back and forth. Her back against the wall while she soothes her baby girl whose sobs are slowly stopping, her eyes closing.

“What can I do?” I’m now sitting in front of her not sure how to even start to dissect this.

“Nothing, you can’t do anything for us,” she kisses Lilah’s head. “No one can.”

I ignore that last part not sure how to talk about this now.

“Jackson, I don’t know what relationship you had with my grandmother, but I don’t need your help. We will be fine. Please, it’s ok, you can leave.” She rests her head on the the wall closing her eyes, the defeat of the day leaving her body.

She looks into my eyes, but nods yes.
“I can pay you for the pizza? I have money. I don’t need a hand out,” she says while trying to push herself up to go get fucking money.

If she weren’t so scared of things I would punch the fuck out of something right now. “I don’t want your money, now or ever. I have no doubt you can take care of yourself. Consider this a housewarming present.” I get up going to the door not even giving her a chance to say anything else.

“She’s never had pizza before, so can you just get us plain cheese.”

I don’t say anything afraid of what will come out of my mouth. I nod and walk out the door, closing it quietly so as not to wake Lilah.

I close my eyes exhaling the breath that I didn’t even realize I was holding.

“She’s barely holding on while fighting for her life. She has demons, they both do. Whatever happened to them, it’s in there deep. The both of them are so scared, you can practically see the fear coming off of them.” I look over at Brenda who is on her porch watering her plants. “Tread lightly, Jackson, or better yet walk away if you aren’t going to do anything about it.”

I don’t have a chance to respond she walks into her house closing her front door softly, leaving me fighting my own demons. 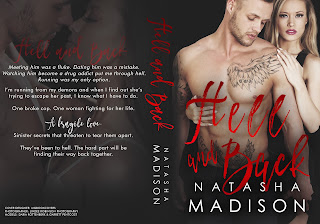 Email ThisBlogThis!Share to TwitterShare to FacebookShare to Pinterest
Labels: 5 stars, arc, Hell And Back, Natasha Madison, reviewed by janna