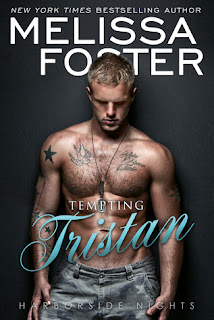 Fresh off the heels of yet another bad relationship, Tristan Brewer is taking a break from men to try to figure out where he keeps going wrong. He knows his biggest fault--he leads with his heart, not his head--and that's never going to change. But after several introspective weeks, he's beginning to get a handle on things. That is, until badass heartthrob Alex Wells walks into his bar...

Alex has spent eight years in the army, months in a hospital bed, and far too long hiding his sexual identity. He's guilt-ridden, damaged, pissed off, and up for a Silver Star for the incident that nearly cost him his life--and kept him from his grandmother's funeral. But all he wants to do is live the life he's always dreamed of and forget his stint with the institution that allows but doesn't necessarily accept.
The chemistry between Tristan and Alex ignites from the moment they meet, and the more time they spend together, the hotter the flames burn. But the closer they become, the more Alex's walls go up, and when the two walk onto a military base, Tristan finds out Alex's physical scars aren't the ones that run the deepest..

This isn’t my first Melissa Foster book, but it is the first of the Harborside Nights series that I’ve read. This is book three and can be read as a standalone, though after reading this I want to go back and read books one and two.

Tempting Tristan is the story of Tristan, a bartender in Harborside, and Alex, a former military man who is moving to Harborside after being discharged from the army. These two have an uphill battle on their hands if they want to be together-for many reasons. I was rooting for them from the start of the book.

Tristan has had some crappy relationships in the past. He’s a man who is secure in who he is and what he’s looking for-which isn’t just some random hookups. In fact, when we meet Tristan he’s taking a break from men, not wanting to rush into anything only to have his heart trampled on. But one conversation with Alex and things start to change.

Alex had a tough life and isn’t quite as secure in himself as Tristan is, partly because of his time spent in the military. He has so many demons to work through but it’s up to him and Tristan to decide if what they COULD be is enough to want to try and get through some of those dragons. I appreciated the depth of the issues Alex faced; Melissa Foster could have given them an easier path for sure, but this one absolutely felt right.

These two had an insane amount of chemistry between them. The attraction was instant but their actions weren’t which just made it that much more explosive when they finally came together. I ached for Alex, truly. This book was much more emotional-and in different ways-than what I expected, but I definitely enjoyed it.

The supporting characters added to this book without taking away attention from the main characters. I will definitely be going back to read the other books in this series.