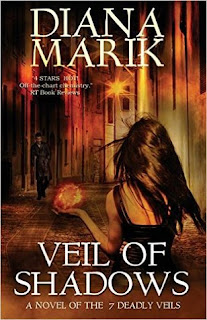 Lord Valadon, CEO of ValCorp and leader of New York’s vampires, has become fascinated with Miranda Crescent, a human woman with powers only Elementals possess. As his enemies conspire against him, he becomes drawn to her, but knows any involvement with Miranda will only endanger her life because within the human population exists the Human Order of Light, a powerful hate group, who would see the eradication of the vampires.

Miranda Crescent is an authenticator of rare works of art who isn’t afraid of danger. Her best friend is the Were Queen and her mentor is a vampire ancient. At first, resistive to Valadon’s charms, she will risk her life to bring him the information he needs to thwart his enemies.

But Valadon’s second, the sexy and sarcastic Remare, believes Miranda is a member of the HOL working to destroy his lord. The chemistry between them quickly escalates as they search for those plotting against Valadon. Putting aside their distrust of each other, Remare and Miranda work hard to discover who is trying to murder the high lord. But Remare’s first loyalty is to his lord. He can’t allow himself to care for someone Valadon has marked as his own…or can he?

Paranormal romance is what got me back into reading years ago so these types of books, vampire romances especially hold a special place in my heart, or should that be blood?  Well whatever one it should be, finding a new paranormal romance for this book whore is like finding a kick ass sale on a pair of shoes, I should also mention I am a shoe whore as well so I can say that with confidence, let’s just say it makes me VERY happy lol.  Anyways, Veil Of Shadows is the first book in the Seven Deadly Veils series and it was a great start to this series, and one that had me hooked into the story pretty quickly.  I am really looking forward to reading more of this series.  Fans of paranormal romance I think will enjoy this start to a new series as much as I did.