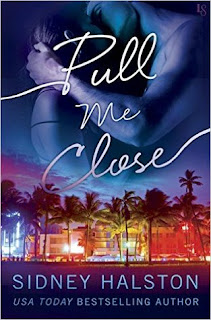 Welcome to Panic, a sultry Miami nightclub where bodies and hearts move to a beat that doesn’t stop at sunrise—the setting for “a magnificent story full of deep emotion” (Sawyer Bennett).

Katherine: I thought I could enjoy a night out like a normal person. I thought I could handle the flashing lights, the pulsing music, the crowded dance floor. I couldn’t have been more wrong. After having an anxiety attack and passing out during my sister’s engagement party at Panic, I wake up in the arms of the hottest guy I’ve ever seen. Nick Moreno’s no gentleman. But he might just be the man I need to help me take control of my life.

Nick: When I hear there’s some random girl passed out in the back room of my family’s South Beach nightclub, I’m pissed. My dad’s already behind bars and we can’t afford any more bad press. But after giving her a lift—literally—back to her apartment, I stop seeing Katherine Wilson as some random girl. She’s gorgeous, vulnerable, and braver than she knows. And when we kiss, all I want to do is pull her close and promise that she’ll always be safe in my arms.

I enjoyed this overall, but there were issues with the pacing for me.

Katherine and Nick worked for me...but they also didn't. I think, for me, there was a lot of time spent with them apart that the idea that they were together seemed a little glossed over, like it was not really what the story was about.
I do understand the why of this...PTSD and panic attacks are real. They are serious. They happen. And, they were explained in depth and in detail in a way that leaves the reader feeling like they understand Katherine. The issue I had is I really felt like I was in her head, like I knew her. but I never felt like I knew Nick. And, I don;t think it was that we were not given info as to his character, but rather Katherine was so developed that it made Nick seem underdeveloped.

The pacing for the story also felt uneven. The parts with Katherine were strong, but the parts with Nick, and her and Nick, seemed slight in comparison. This made it feel like it was uneven and hard to follow.

I do recommend this book, and I give it a lot of credit for the development of Katherine...but I would have liked to see the relationship and Nick developed as completely.