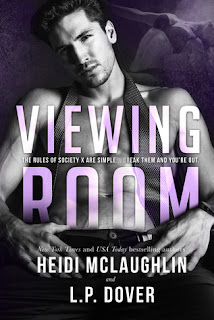 The rules of Society X are simple . . . break them and you're out.

It doesn't matter if you want to know, it's forbidden.

It doesn't matter if you want to call, it's forbidden.

Rule #3 - Everything is to remain strictly anonymous.

It doesn't matter if you want to tell, it's forbidden.

The Viewing Room will make it happen.

For Kennedy Vaughn, it’s an escape.

What you witness in the viewing room will have you asking for more . . . 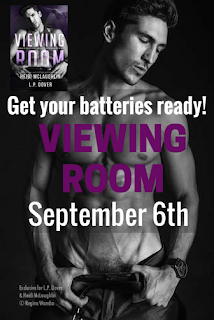 “Kennedy, do you mind sitting in the chair?” Max asks.

I turn to look at him and then focus on the chair. I can do this. After joining him up on stage, I take a seat.

Kneeling down in front of me, he smiles. “If you ever feel uncomfortable, all you have to do is say stop. We’re not going to do something you don’t want.”

“Are you ready?” Closing my eyes, I nod. The lights dim but when I open my eyes, I can’t see the couch. The lights above have hidden them from sight, making it feel like I’m the only one in the room. Music starts to play and it’s no shock that “Pony” by Ginuwine is the song choice. It’s the perfect one to set the mood.

I can feel someone behind me and then their warm hands caressing my shoulders. The smell of his cologne drifts to my nose and I gasp. Is it the guy I talked to in the club? Heart racing, I wait for him to face me, but he stays behind me, his mouth so close to my ear.

“Are you ready, Kennedy?” he murmurs. I suck in a breath and freeze. It is him. He circles around me, his dark eyes full of heat. “Are you?” he repeats.

He moves closer, straddling my legs with his hard cock pressed between my breasts. Sliding lower, his body shields me from view as he settles between my thighs. His hand slides under my skirt and he smirks, knowing the others can’t see what he’s doing. What’s exciting is that I’m actually letting him do it. I want him to touch me. If the others weren’t in the room, there’s no telling what I’d allow him to do. My body craves a man’s touch.

He pushes his hand farther up my skirt, his middle finger skimming across my underwear. My skin’s on fire and I know he can feel the wetness between my legs. Groaning low, he gently nips my breast through my shirt.

“How ’bout we give ’em a show?” he asks, murmuring the words.

All I can say is ‘okay’ and then I’m in his arms. He carries me over to the bed and lays me down, covering my body with his. His hips move against mine as if we’re having sex and in my mind I can just imagine us doing it. With his back to my friends, he lowers his underwear so I can see his arousal. My whole body trembles and I want desperately to feel him inside of me. He slides his hands up my legs and pulls down my underwear, breathing in my scent. The song is almost over but yet I want more. It feels like I’m high, drugged up on sex and lust. When the music stops, the room is dead silent except for our breathing. Hunter’s chest rises up and down, his eyes wild and unsatisfied. At least he looks how I feel.

“Do you still think I’m gay?” he asks, whispering the words.

A small smirk spreads across my lips. “Maybe. It’s a shame you can’t prove otherwise.”

The lights brighten and he slides off my body. Grabbing his robe, he puts it on and backs slowly away. “Until next time …”

I watch him walk away, my heart pounding against my chest. I’ve never been so exhilarated in all my life. Thunderous steps pound toward me, and then Sara appears in my line of sight, fanning herself. “Holy shit, I can’t believe you did that. It was so hot.”

“Yes it was. And I really want to do it again.”

Chris and Max both chuckle. “She’s addicted now,” Chris says. “Looks like you have a new member.” He’s completely, and without a doubt, right. I’m addicted and I want more … a lot more. 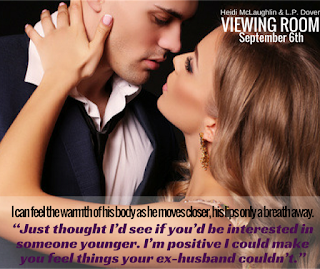 L.P. Dover, is a southern belle residing in North Carolina along with her husband and two beautiful girls. Before she even began her literary journey she worked in Periodontics enjoying the wonderment of dental surgeries.

Not only does she love to write, but she loves to play tennis, go on mountain hikes, white water rafting, and you can’t forget the passion for singing. Her two number one fans expect a concert each and every night before bedtime and those songs usually consist of Christmas carols.

Aside from being a wife and mother, L.P. Dover has written countless novels including her Forever Fae series, the Second Chances series, the Gloves Off series, the Armed & Dangerous series, the Royal Shifters series, and her standalone novel, Love, Lies, and Deception. Her favorite genre to read is romantic suspense and she also loves writing it. However, if she had to choose a setting to live in it would have to be with her faeries in the Land of the Fae.

You can find her here:

Originally from the Pacific Northwest, she now lives in picturesque Vermont, with her husband and two daughters. Also renting space in their home is an over-hyper Beagle/Jack Russell, Buttercup and a Highland West/Mini Schnauzer, JiLL and her brother, Racicot.

When she isn't writing one of the many stories planned for release, you'll find her sitting court-side during either daughter's basketball games

Heidi's first novel, Forever My Girl, is currently in production to be a major motion picture.