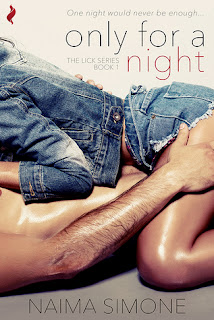 Rion Ward fought hard to be free of the Irish mob life. Now, as the co-owner of Boston’s hottest aphrodisiac club, he’s traded crime for the ultimate sexual fantasy. But when the “good girl” from his past walks through Lick’s doors, he discovers that his unconsummated hunger for her never abated.

Widowed for two years from a man who felt that anything besides the missionary position was dirty, Harper Shaw is ready to move on. The first step to feeling alive again is sex. Hot, dirty, black-out-from-orgasm sex. And who better to provide it than the brooding, sexy, tatted bad boy-turned-man she’s known for years?

Rion, however, has one stipulation: He’ll be hers only for one night. One night to explore her every fantasy. One night to push her limits. One night to introduce her to a passion that makes both doubt if it will be enough…

The writing is excellent and you believe the actions of the characters. There is a not a strong developed plot, but this is not something you expect. The story is about a woman who visits a sex club with the intention of fulfilling her fantasies, and you get the story of her experiences.

This the 2nd book I have read within the Scorched line, and I am looking forward to the others.