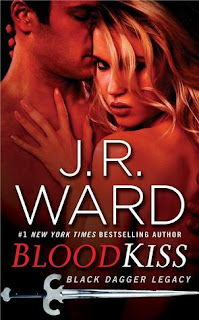 Paradise, blooded daughter of the king’s First Advisor, is ready to break free from the restrictive life of an aristocratic female. Her strategy? Join the Black Dagger Brotherhood’s training center program and learn to fight for herself, think for herself…be herself. It’s a good plan, until everything goes wrong. The schooling is unfathomably difficult, the other recruits feel more like enemies than allies, and it’s very clear that the Brother in charge, Butch O’Neal, a.k.a. the Dhestroyer, is having serious problems in his own life.

Blood Kiss is the first book in the new spin off from J.R. Ward’s Black Dagger Brotherhood series.  If you are a fan of the original beginning books, then you will feel right at home with Blood Kiss.  Remember all the things that you fell in love with when you first met the Brotherhood?  I was reminded of those same things when I started Blood Kiss.  I personally have loved every book in the series, each couple has their own story to tell and sometimes that story isn’t over just like in real life.

Blood Kiss not only focuses on the new trainees but also has a lot of Butch and Marissa’s relationship in it as well.  Now hold on all you haters out there that have bitched and moaned that the books have gone back to previous couples instead of moving forward.  Remember that real life comment I made a few sentences ago?  Relationships, especially in a series where all the characters are seen over and over again because of how the storyline is written, don’t just end at the end of their books.  They have ups, they have down, they have relationship issues, just because they are vampires doesn’t mean their relationships are all happily ever after with no problems.  Before you go all “I hate you book whore” on me, for me I love that we are seeing more of our favorite couples and their issues are worked into the storylines, especially in this case.

I am super excited about reading about the newest trainees for the Brotherhood.  The last time there was a class is when JM, Blay and Quinn went through the program and fans of this series know how that ended up.  I love seeing the next generation of future warriors come about.  I especially am loving the girl power being added into the mix with two female trainees, and one being part of the glymera.  Paradise and Craeg were the perfect combination for the start of this new series.  Rich girl meets poor boy and it shows how for some people the amount you are worth isn’t what makes you you, but who you are as a person does.  It also shows that sometimes men can be idiots but can eventually prove they are smart after all.

This book whore is hooked once again by the words that the Warden has written.  Blood Kiss not only kicked ass as a beginning book, it also took the edge off of my withdraw symptoms for the next BDB book coming out in April.  I have loved the BDB series from the first time I ever read it, and I have a feeling that I will love the Black Dagger Legacy series just as much.