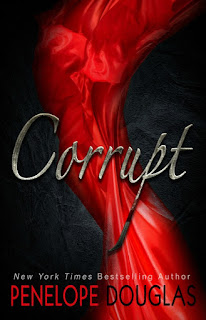 I was told that dreams were our heart’s desires. My nightmares, however, became my obsession.

His name is Michael Crist.

My boyfriend’s older brother is like that scary movie that you peek through your hand to watch. He is handsome, strong, and completely terrifying. The star of his college’s basketball team and now gone pro, he’s more concerned with the dirt on his shoe than me.

But I noticed him.

I saw him. I heard him. The things that he did, and the deeds that he hid…For years, I bit my nails, unable to look away.

Now, I’ve graduated high school and moved on to college, but I haven’t stopped watching Michael. He’s bad, and the dirt I’ve seen isn’t content to stay in my head anymore.

Because he’s finally noticed me.

Her name is Erika Fane, but everyone calls her Rika.

My brother’s girlfriend grew up hanging around my house and is always at our dinner table. She looks down when I enter a room and stills when I am close. I can always feel the fear rolling off of her, and while I haven’t had her body, I know that I have her mind. That’s all I really want anyway.

Until my brother leaves for the military, and I find Rika alone at college.

The opportunity is too good to be true as well as the timing. Because you see, three years ago she put a few of my high school friends in prison, and now they’re out.

We’ve waited. We’ve been patient. And now every last one of her nightmares will come true.

Holy shit!  I finished reading Corrupt a couple of days ago and I am still in book hangover mode.  This is one that I can’t stop thinking about.  I have loved Penelope Douglas since the first time I read one of my absolute favorite books, Bully, and to this day I still read it again and again.

Michael for me, reminded me a lot of Jared in Bully except make him the worst you ever thought he could be and double that.  I loved how mean and manipulative Michael was from the very start.  I love assholes in books, and Michael is one major asshole, but hot damn he is a sexy as hell one.  But you can also see his real feelings for Rika slowly begin to show more and more and right when you think he is going to be a nice guy, bam he really proves how horrible he can be.  It’s how he feels afterwards when truths are told and Rika’s life is at risk.

Rika has always wanted Michael.  Events take place and just when she thinks they may have a chance at a relationship those events start something that totally destroys everything.  Is Rika guilty of what Michael and his friends accuse her of?  Maybe, maybe not you will need to read it to find out but be prepared to be on the edge of your seat or bed the entire time.  The things that Michael and the Horsemen put Rika through are unforgivable.   Now don’t think she just sits back and takes it, oh no, Rika has sass, attitude, and isn’t afraid to stand up for herself even if it means her heart is breaking at the same time.

I won’t get into too much detail about how hot those sex scenes were.  All I have to say is one word.  Sauna.  That about some up the level of heat that this book contains as well as a scene that will have you changing your panties from being drenched.

Penelope Douglas you have taken my love for you to a whole new level with Corrupt.  I think it may have even beaten Bully as my favorite book by you.  I really hope that you plan to do more books about the guys because I would love to read more and more about the Horsemen. 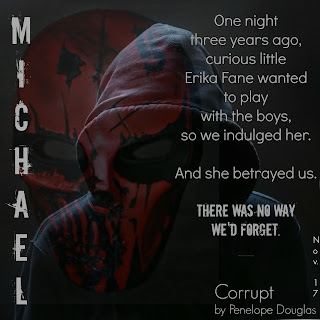 I fell back to my feet and crept through my apartment as I listened to the pounding that had now become a steady attack. My feet followed the sound, stepping absently closer to it, and I finally pressed my ear against the wall leading to my hallway, my heart racing as the vibrations touched my skin.

Resting my cheek against the surface, I swallowed the tight lump in my throat as the thumping against the wall grew faster and faster.

There was someone over there. In the empty apartment.

Holding up my phone, I dialed the office downstairs but got no answer. I knew there was a night manager named Simon Something-Or-Other, but I didn’t think many people were on duty at night. He must be away from his desk.

I continued listening, wondering if I could ignore it and just wait until morning to ask the manager about it, but the further down the hall I travelled, the louder it got until I was standing next to the rear entrance.

Opening up the door, I peeked my head into the hallway, holding the heavy steel exit open just enough to inspect.

Glancing to my right, I saw a door just like mine. And then I heard a woman’s high-pitched cry ring out around me, and I started breathing harder.

Was she having sex? My mouth fell open as I tried not to laugh.
Oh, my God.

But I thought the place was supposed to be empty.

I stepped out, knife in hand—just in case—and walked quietly down to the other door, glancing up and seeing small security cameras along the wall, probably installed when the apartments were built.

Pressing my ear to the door, I listened, still hearing the thump, thump, thump of something hitting the wall, and the girl’s breathy cries over and over again.

I folded my lips between my teeth, covering my smile with my free hand.

And my face fell, hearing the fear in her voice. The short, shrill screams were now different. Panicked and scared, and her cries sounded struggled. My mouth suddenly went dry as I stood there listening.

I backed away from the door, not finding it funny anymore.

But then something hit the door from the other side, making a loud thud, and I scurried backward. “Oh, shit,” I gritted out under my breath.

I shot my head up to the cameras, now wondering if they fed to Security downstairs or to whoever was inside the apartment. Did they know I was out here?

I spun around and dashed for my door, grabbing the handle and trying to twist it.

But it was locked. “Dammit!” I mouthed. Fucking thing must lock automatically.

Another thud hit the door, mere feet away from me—so close—and I darted my eyes over to it, my breathing turning fast and painful.

I pulled on the door handle again, twisting and yanking, but it didn’t budge.

Another thud hit the door, and I jerked upright, dropping the knife.

I dived down to pick it up, but just then I heard the other door swing open, so I bolted down the stairwell, hiding behind the wall and forgetting about the knife.

Screw this. Whoever was coming out of the vacant apartment was definitely someone I didn’t want to meet. I dashed down flight after flight, a cry lodged in my throat as fear gripped my chest.

A pounding echoed above me, and I spared a quick glance upward, seeing a hand sliding down the railings as whoever it was jumped flights of stairs.

Oh, my God. I raced down, one flight after the other, a drop of sweat gliding down my neck. The pounding was getting closer and closer, my legs about to give out as my exhausted muscles worked as fast as they could. I gasped, seeing the door labeled LOBBY. I yanked it open and burst through, looking behind me once again to see if he—or she—was behind me.

But then I slammed into a wall, and I let out a small cry as hands gripped my upper arms.

I looked up and exhaled a breath, seeing Michael Crist towering over me, his eyes narrowed.

“Michael?” I breathed out, frozen in confusion.

I opened my mouth, but nothing came out. Why was he here?

He stood in front of an elevator, a different one than I had taken this morning, dressed in a black suit, looking like he’d just been at a club or something. A young brunette stood next to him, beautiful in a tight, navy-blue cocktail dress that fell mid-thigh.

I suddenly felt exposed, dressed in my silk sleep shorts and black tank top, my hair hanging about, probably in tangles.

“I…” I looked over my shoulder again, noticing that whoever had followed me down the stairs hadn’t come out the door yet.

I twisted my head back, looking up at Michael. “I heard something up on my floor,” I told him.

And then I shook my head, still confused. “What are you doing here?”

“I live here,” he shot back, and I immediately recognized that ever-present intolerant tone that he always used with me.

“Live here?” I questioned. “I thought you lived in your family’s building.”

He slid a hand into his pocket and cocked his head, looking at me point-blank like I was stupid.

I closed my eyes, expelling a sigh. “Of course,” I breathed out, realization hitting. “Of course. You’re the one who lives on the twenty-second floor.” 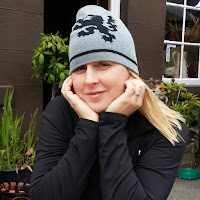 Penelope Douglas is the New York Times, USA Today, and Wall Street Journal bestselling author of the Fall Away series.

She dresses for autumn year round, loves anything lemon flavored, and believes there is too much blood in her Coca Cola stream. Or too much Coca Cola in her blood stream. Or…

You know what? It doesn’t matter. She loves Coke. Now you know.

She lives in Las Vegas with her husband and daughter.

The following goodies are up for grabs!
a Rafflecopter giveaway
Posted by Janna at 7:00 AM