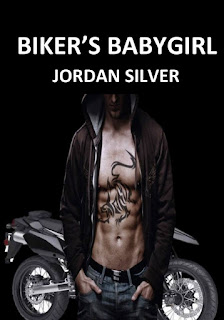 Creed is an ex sharpshooter turned bike crew President, with a rough upbringing and the scars to prove it. Nine years ago an old drunk offered him his twelve-year-old daughter for his next pint. Knowing that as fucked up as he was he was still the kid’s best bet, he took the deal. He left her with an aunt he thought he could trust because Uncle Sam owned his ass for the next little while, and he had no choice.
Then his baby girl turned eighteen and shit went south, literally. He knew he had to stay the fuck away from her or she’d be under him before she could blink, but he made a deal with himself.
When his baby girl hit twenty-one he was taking her no matter what.
Her birthday was three days away and though he’d kept his distance for the last two and a half years he’s been keeping tabs on her. It was time to collect.

Pulling her into me I hugged her as close as I could against my heart. “Why are you still crying baby girl? Look at me.” I smoothed the hair back from her face and looked at her without speaking for a while. “We had our first fight, it was a bad one, you lost your damn mind, but I’m still here. I’m sorry you felt even for one second that I chose her over you that would never happen. Now stop the tears I don’t like it.”

“Kiss me.” I waited for her to lift her lips to mine before taking them in a sweet kiss. “I’ll give you my seed tonight okay, stop fussing.” Since she lost that fucking look I figured that’s what the fuck was wrong with her spoilt ass.

“You want chocolate?” She nodded her head yes when not five minutes ago she said she didn’t want shit. I doubt she knew how much of her heart she’d shown me today. I’ll have to be careful in the future not to harm her soft heart.

Jordan Silver is the author of The Lyon's Series, Sex and Marriage Series, The Spitfire Series, and many more available at Amazon & Smashwords.